You spend hours, if not days, creating a great piece of content a blog post, a podcast, a video, and then you release it. You push it out into the world and crickets, nothing really happens. Maybe you get a couple likes, a couple common senses, social media, but you don’t really see any true ROI from the piece of content. Does this sound familiar to you? Well, if so, then today’s video is all for you, because I am sharing five tactics that you can use to create content that is going to naturally promote itself and do the hard work for you. I’m Samantha Russell, the chief evangelist at FMG Suite and Twenty Over Ten. And let’s jump right in.

5 TIPS TO CREATE CONTENT THAT GETS MORE OVERALL ENGAGEMENT

So tactic number one is to create content around timely topics that your audience is already actively talking about. So it seems pretty intuitive, but actually, people don’t take advantage of it as much as they should be. So, for instance, back in 2021, the beginning of 2021, I suggested that creating content around crypto was going to be a number one marketing opportunity for advisers. Because of this very thing. People are reading about it in the news. They want to know where they’re missing out. Is now the time to buy the dip? Right? So even if you’re not recommending crypto to your clients, just creating content around it is going to help lend itself to be more shareable. Right? Here’s another example from when the pandemic just started in March of 2020, I created this Twitter thread and then turned it into a blog post and a video titled If I Owned a Financial Planning business Right Now, here is exactly what I would do right now. And I outlined the ten marketing steps I would take to accommodate this new normal during the pandemic. And it was really well received because it was so timely. 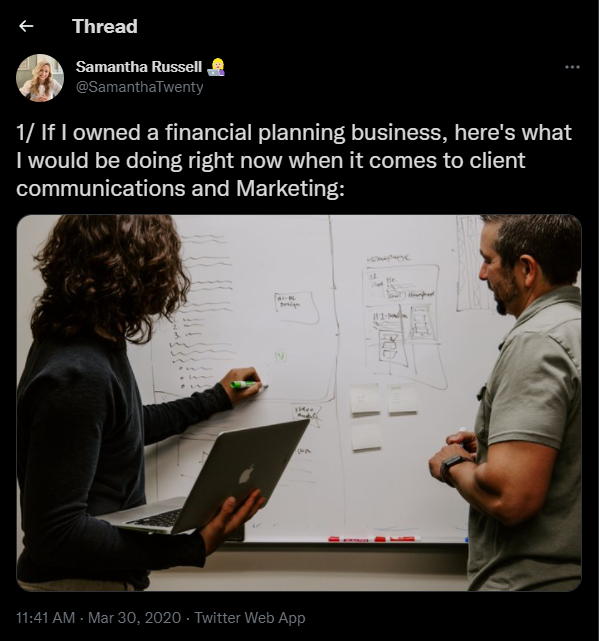 Okay, tactic or strategy number two? Take controversial positions, so have an enemy of some sort that you are sort of fighting against in your content piece to make it even more shareable. Now, this enemy doesn’t need to be an actual person. Of course, it could be a way of thinking that most people hold or a long held belief system. Right? We see people do this all the time. They have some sort of enemy that they are trying to rip down the old way of doing things versus the new way that they are promoting. When you do this, it stands out from the message that everyone else has, and it makes people want to read your take. So this is tactic number two. You can give it a try.

Okay, tactic number three is to feature quotes or examples or the work of other people in your piece to give them credit. And then when you go to share it on social media, you tag them because you featured them in your piece or the day before you’re going to publish it, you send them an email and you say, hey, I’m going to be publishing this piece tomorrow. I featured a quote from you in it that I found online. Would love for you to share it with your audience if you think they would like to read about it as well. So this is something you don’t necessarily need permission from people to actually even do, right? I love Spark Toro has coined this permission list marketing, which is basically that other quotes from thought leaders are already out there on the website. So you can take those quotes, add them to your piece, and then tag people when you share it on social media, when they see those Tags, they are going to be much more likely to click over and view it, see what the person has tagged them in, and then either leave a comment like it, or reshare.

4. USE THE HOOK, LINE & SINKER FRAMEWORK

Okay. Tactic number four, use what is called the hook, line, and Sinker’s strategy, which I’ll put this great graph of it up right here. 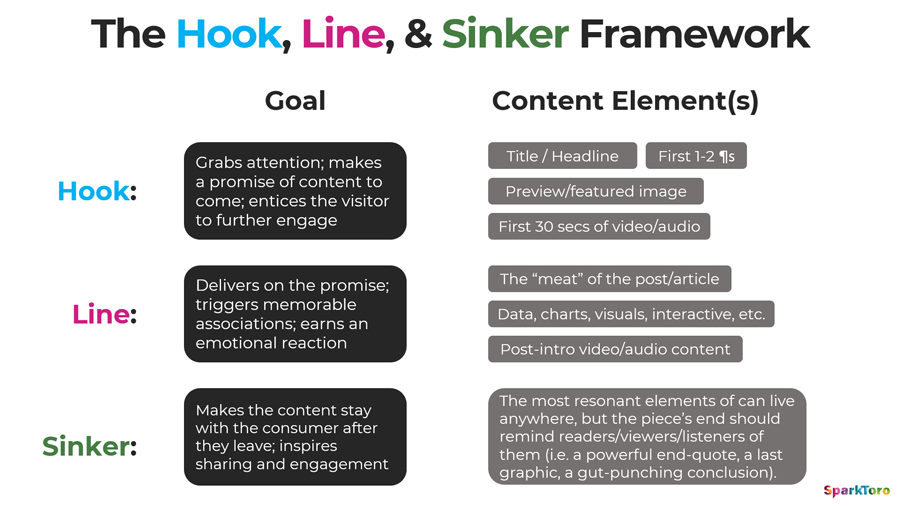 You can see basically what it means is the hook is to grab somebody’s attention, right? It’s going to make them want to read the rest of the piece. So this would be a really compelling title or the first 30 seconds of your video, something that’s going to grab their attention and say to them, what’s in it for me? What am I going to get if I pay attention to this content? The line delivers on the promise of the hook. So this would be the meat of the post. This would be where you put any of your infographics or your data, your charts, your visuals, any of the meteor elements that is really going to keep reeling that person in. Right. Think of the line you’re reeling in that big fish, and then the sinker. The last part is going to make the content stick with your audience long after they’ve closed out. It’s the thing that gets in their head and they can’t stop thinking about it. It’s how you reel that fishing so that they want to reshare it. So this would be some really great closing line or statement or controversial take that is going to stick with them. So using this hook, line and sinker method really makes it a lot more probable that your content will be shared by people who read it.

Okay. And then tactic number five, maybe one of the easiest to do, but the one the least amount of people do is to make a list of all of the businesses, the individual people, the community groups that would find your content really relevant. And before you hit publish, or right before you hit publish, send an email to them, letting them know that you publish this piece. Here it is. And would they like to share it with their audience? So even something as simple as we just published this piece on X, I immediately thought of you, thought you might want to share it with your audience if you think they’ll find it valuable as well, this is going to get it viral get it trending really quickly, right because we know right after a piece is published, the more eyeballs that see it and leave comments and reshare it, the more probability that all the different algorithms are going to say. This is a piece people are talking about and want to keep picking it up and sharing it.

If you found this helpful, I would love if you would reshare it or give us a thumbs up at least and drop a comment below to let us know which tactic you found to be most useful again. That helps more people to see this piece of content. I’m Samantha Russell and thanks for taking joining us for another marketing strategy. We’ll see you next week. Bye.