Why is your social media not producing any results for your business? In this week’s video Samantha Russell, Chief Evangelist for Twenty Over Ten and FMG Suite shares the answer and five reasons you’re not getting any results.

SOCIAL MEDIA: 5 REASONS YOU’RE NOT GETTING ANY RESULTS

And if you don’t want to watch this whole video, the short answer, the too long didn’t watch answer is you’re boring. It sounds harsh, but honestly, that is pretty much the number one reason why social media doesn’t work for business. But I’m going to give you five reasons why, and we’re going to dive into them in more detail. So let’s get started.

1. You Don’t Engage With Others Enough

The number one reason is that you’re not engaging with others enough. And by this, what I mean is you’re posting media. You’re getting the media part. Right. Of social media, but you’re not being social. The whole point of social media is to recreate online the types of conversations and networking and connecting that we do offline. So every single day when you post something rather than just having it auto, post to your account and you’re hoping and praying people will see it and click it, you need to do some work. You need to go. And every time that you’re posting one thing, you need to be commenting on five other people’s posts. We call this the 80 20 rule. So for every one thing you post, leave comments on five other people’s posts. And the reason this is so important is it’s going to build rapport. It’s going to get people to say, Who’s Samantha Russell? I’m going to go click over to her profile and check her out and see what she has to say. Right. It’s going to get people to notice you, which is going to build that network. And that following. And don’t just leave comments on people that you know posts. You should be commenting on stranger’s posts as well. That’s again, how you build that network and create that following.

Okay, the second number the number two reason going back to the earlier point, is that you’re boring. So you don’t leave comments. You don’t make people think. You don’t make people laugh. Think about the reason that people go to social media. We go to take a break from our day to stop whatever we’re doing and to see what’s going on in the world. Right. To connect with other people. So many people instead use social media as a place just to pitch their business or to make a sales pitch, if you will. That is not going to Garner engagement. And the name of the game in social media is engagement. The more people that leave a comment or a thumbs up on your posts, the more other people will see it in their feeds. And that’s how things snowball and start to go viral. And you get posts that get a lot of engagement. Right? So again, when you’re thinking about what to post, you want to really stop the scroll. You want to stop people in their tracks and get their attention. So here’s a great example from Dave Zoller. 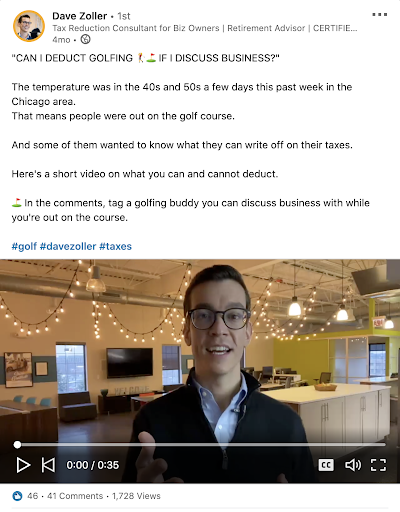 He says, Can I deduct golfing if I discuss business? The temperature in Chicago is warming up and people are hitting the links. And then he says, here’s a short video on what you can and can’t discuss in the comments. Tag a golfing buddy that you can discuss business. Right? So what is this post getting? Right? It’s talking about current events that are happening locally. Right? In Chicago, the temperatures are warming up. It also is really hyper-targeted to his audience of business owners. So they’re going to want to know the answer to that question, can I deduct this from my taxes? And then, of course, the idea that he says Tag a golfing buddy that you can discuss business with also really helps because people are going to start tagging their friends on the post. Here’s another example from Dave Lowell. 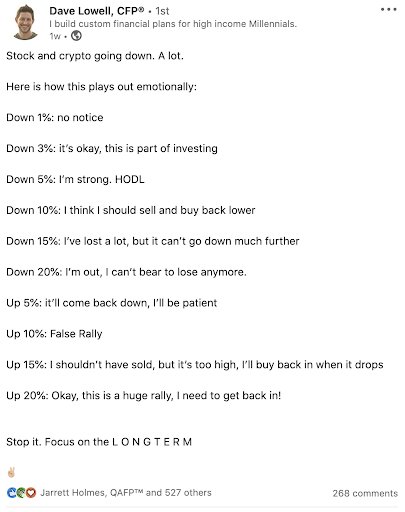 Just recently when everything was going up and down with crypto at the end of January 2022, he has this great post that’s stocking crypto going down. Here’s how this plays out emotionally, and he starts to take you on this roller coaster ride of how you’re feeling as an investor. Right? It works because it taps into our emotional response that we’re all collectively having if we’re watching what’s happening with crypto. So just two examples of how to not be boring on your social feeds.

Okay. The number three reason why your social media isn’t producing results is that you don’t use the what’s in it for me, mindset. I love this example here of what the iPod, the original iPod could have used as their marketing tagline, the world’s first portable digital media player versus what they actually use, which was 1000 songs in your pocket. 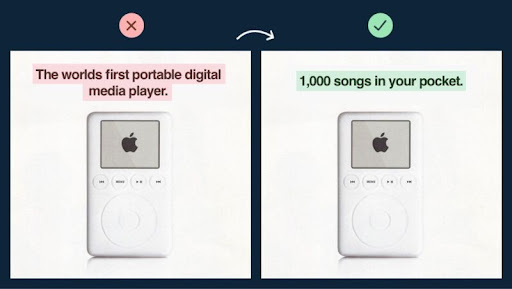 Think about the difference there. Right? We all, as consumers, are very busy going about our day and we’re tuning out messages that are not specific to us. So using that what’s in it for me, mindset is how you’re going to get your message across to the right people, the people that are meant to see it and will resonate with it. So again, don’t start your posts with things like I may or we that’s very you centered. Instead, you want to change it and be centered on the other person to again, stop their scroll. So let’s say you have a blog post that you just wrote. You wouldn’t write. My latest blog post covers everything you need to know about the recent market correction. Instead, you would start it with does all this market volatility have you questioning the allocation of your portfolio? Ask yourself these five questions to see if you’re on track, and then maybe have a funny meme or something that stops people in their tracks.

4. You Never Get Personal

Okay, number four reason why it’s not working. You never get personal. If you were to ask anybody right now what is the most popular post they’ve shared on LinkedIn or Twitter or any of these platforms. It’s going to be something like when I announced the birth of my new child or when I posted a picture of my fiance and I when we announced our engagement or at the end of the year when we share our company post and how we’ve given back to the community. The whole point again of social media is to build those social connections so share personal stories share information about yourself and your team and you will see a huge amount of engagement come from those posts.

5. You Have No Opinion

And number five the last one is that you have no opinion. Everybody wants to be known as a thought leader but nobody wants to share an opinion that others will criticize or disagree with. You can’t have it both ways. You have to have an opinion for people to start that conversation right? So if everything you’re posting is a statement that everyone agrees with already, you’re not a thought leader. I hate to say you’re a thought follower and you might get some thumbs up on your posts but it’s not going to build that conversation and start that dialogue. The content that engages us is the content that makes us think or that rephrases something we’ve been thinking about in a new way. You need to have a voice if you ask any PR expert how do you get quoted by journalists they’ll tell you that you have a different opinion than everyone else the journalist is going to talk to. So here’s just another example from Twitter from John here he took a screenshot of somebody’s fee schedule and he started a whole conversation about what are appropriate fees for advisers. 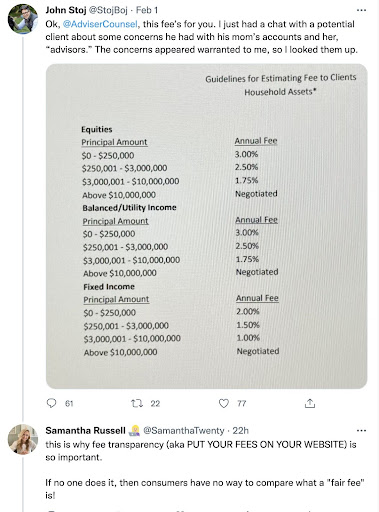 Another great example from Kristen here. She said can we ban all stock images that look like this right? Controversial opinions that are going to get people talking. 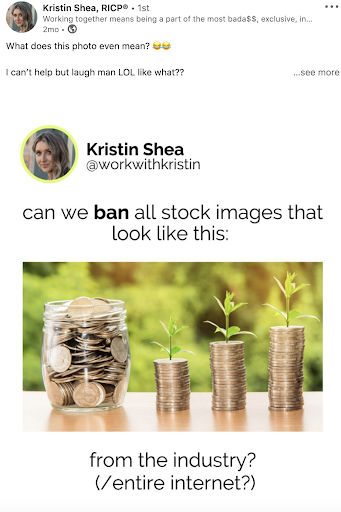 I hope these five tips really help you think about your own social media strategy. If you thought this was helpful please give us a thumbs up and comment below which of the five were most thought-provoking for you and we’ll see you back next week for another at marketing.